The Americas are home to some of the biggest economic powerhouses on the planet, not least of which being the United States. Welcome to our home for the latest on the continents of extreme wealth and poverty.

A key platform for President Elect Donald Trump is to “bring the jobs back from China”. But what happens when the Chinese are already giving those jobs to machines?

Advances in Artificial Intelligence and Robotics have led to the replacement of Human workers across the country. As the second wave of automation begins, which industries are most at risk? Read more in our special report.

Unable to continue their access to over the counter painkillers, or searching for a bigger high, users have moved to the street. Image Credit: Jordi Bernabeu Farrus

Street heroin is being increasingly cut with stronger opiates such as Fentanyl – heightening the risk of overdose.

Prescription painkillers are being given to patients at alarming rates in the United States. Image Credit: Eric Norris

Opiate addiction is killing Americans by the thousands. A system of over-prescription and maltreatment is fuelling a silent epidemic that has hurt more people than it helps.

** ADVANCE FOR WEEKEND OCT. 1-2 ** A Drug Enforcement Administration agent shoulders a bundle of marijuana plants down a steep slope after working with other law enforcement officers to clear a patch of the plant from national forest land near Entiant, Wash., Sept. 20, 2005. Police confiscated 465 marijuana plants at the so-called “garden,” a small find compared to the thousands of other plants confiscated on some other busts in the area. The illegal marijuana growing operations are wreaking havoc on counties with huge tracts of open space and few resources to tackle them. (AP Photo/Elaine Thompson)

Americans spend more than $100 billion annually on illicit substances. As of 2015, the US government will have spent $15 trillion on drug prevention across the globe. Should drugs be legalised?

Colombian soldiers on an operation against the Farc – the last major leftist insurgency in Latin America. Photograph: Luis Robayo/AFP/Getty Images 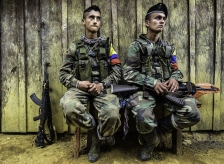 Revolutionary Armed Forces of Colombia (FARC) members rest at a camp in the Magdalena Medio region, Antioquia department, Colombia on February 18, 2016. FARC leader Timoleon Jimenez confirmed that his men were attacked by the Colombian army as they went to received one of the commanders who takes part in the Havana peace talks, who was going to inform them about the situation of the negotiations. The Marxist guerrillas have been observing a unilateral ceasefire since July. But while the government has stopped bombing FARC positions, it has yet to accede to the rebels’ demand for a bilateral ceasefire. AFP PHOTO / LUIS ACOSTALUIS ACOSTA/AFP/Getty Images

Colombia: Peace with FARC after 54 years

After more than half a decade of war, Peace has come to Colombia at last. Decades of negotiation have brought a tenuous cease-fire, but will the peace process be complete? 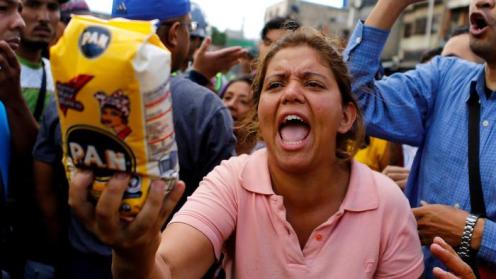 The price of basic goods such as foods and medicine have now blown out by more than 1000%. Has Venezuela reached its breaking point as the people starve?

Looking for older stories? Check out the Archives