Medicines Sans Frontiers (MSF) has announced that it will be ending its provision of services in the Northern Yemen after a fourth air-strike on its facilities this year. During the latest bombing, 19 people, including staff and patients, were killed in the explosion. MSF told media that whilst they will be withdrawing their professional staff, the facilities will remain open but staffed by local volunteers only.

In a statement, a spokesperson outlined the “indiscriminate bombings and unreliable reassurances” from the Saudi-led coalition as the reason for its decision. The announcement comes as fighting has intensified across the country after failed peace-talks last month.

UN agencies now put the death toll at more than 900 people since the war escalated following the failed negotiations.

The fight for control of Yemen continues largely ignored by mainstream media as Saudi Arabia and it’s coalition continue their armed intervention. This has largely taken place through a bombing campaign in support of the ousted government, which has long been backed by the Arab kingdom.

In September of 2014, Shiite Houthi rebels captured the capital of Sanaa during an open rebellion that quickly spread across the country. President Abdrabbuh Mansour Hadi’s loyalists were  only just able to retain control of some coastal towns thanks to a swift intervention from its Sunni allies led by Saudi Arabia. The fight between the two groups is a part of a regional power-struggle between the Shia-ruled Iran and the Sunni-ruled Saudi Arabia which shares a border with Yemen.

Yemen’s strategic importance lies in its proximity to Saudi Arabia as well as its location on the Bab al-Manbab strait. This narrow waterway links the Gulf of Aden to the Red Sea and is through which most of the world’s oil shipments must pass through. Both Egypt and Saudi Arabia worry that Houthi control of the strait would threaten their vital oil-trade and give more leverage to Iran.

Yemen: A Crumbling Peace – Yemen is being torn apart by a civil war. Why?

Afghanistan: Bombing our own Doctors – Medicines Sans Frontieres has been attacked at a key facility in Afghanistan. If US forces knew the location of the hospital, then why did they attack it? 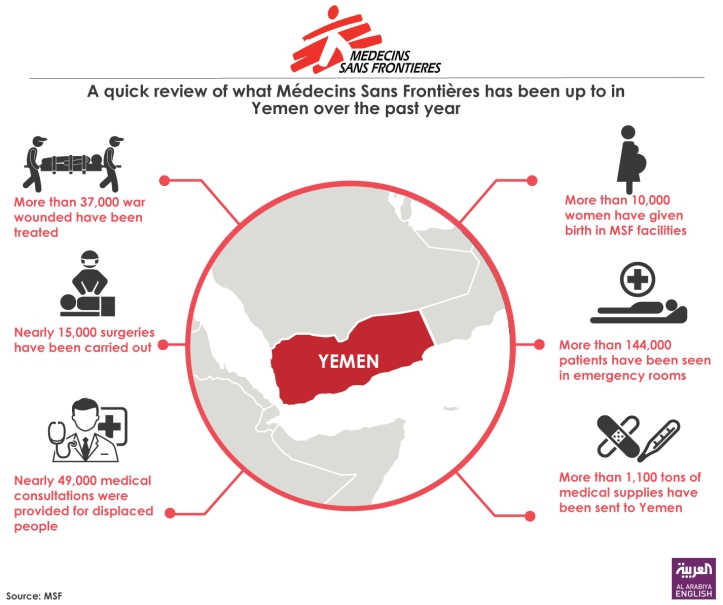 MSF’s withdrawal of direct support in the region underlines a feeling of frustration from the group. In a statement, the Geneva-based group stated that “the air strike on Abs Hospital was the fourth and the deadliest attack on an MSF-supported medical facility during this war”, continuing to point out that despite repeated warnings and information shared about the location of its facilities “there have been numerous attacks on other health facilities all over Yemen”.

MSF is adamant that aerial bombardment of its personnel and patients has continued despite it sharing the GPS co-ordinates with all parties involved in the conflict. It is now urging for an independent investigation. “Coalition officials repeatedly state that they honour international humanitarian law, yet this attack shows a failure to control the use of force and to avoid attacks on hospitals full of patients”.

In May, the group stated that at least 100 members of its staff, patients and caretakers had been killed due to aerial bombardment and shelling attacks.

The loss of MSF’s support in the region is a crucial blow to the Yemenis people. Without a stable power-structure, key areas such as health cannot be neglected as it will only come at their cost.

Stay up to date and subscribe to our page.

Our continuing success is only thanks the support of people like you.