Now there are 7.5 billion people on this planet. By 2050 that number is projected to hit 10 billion.

This is arguably the most immediate threat to humanity as we know it. If the current population growth rate continues, we will reach a devastating tipping point, one which we may already have passed.

Forget climate change, disease, war, natural disasters – overpopulation may prove to be the deadliest threat we are facing as by its very definition it combines all of humanity’s problems and escalates them. Like all laws of physics, there are certain factors out of our control and one of these rules is that of exponential growth. If something is growing at one percent a year, it will double in 70 years, two percent it will double in 35. Currently, the world population growth rate is 1.5 million a week, which is equivalent to 80 million or 1.13 percent a year. If we continue to exponentially expand our global population we will reach the limit of what is biologically termed – carrying capacity. The carrying capacity is the maximum population of a species an ecosystem can support, once this limit is surpassed, the system collapses and the population crashes. Some projections suggest that the Earth will reach its carrying capacity for humans within 100 years. 10 billion people alone could require three Earths’ worth of resources in order to survive. We are facing the collapse of civilisation as we know it.

So what has brought us to this point? One of the first answers is the development of modern medicine and the rapid increases in global wealth. Ever since mortality rates began to reduce, the population has been increasing – it has been since the Bubonic Plague of the 1400’s. It is not so much that more children are being born, but that more people are staying alive and for longer. But, crucially, for much of the world, the decrease in mortality rate has not coincided with a reduced birth rate.

The prime example of this is after WWII during what is known as the ‘baby boomer’ generation. As world economies began to recover, so did global populations. It was a time of prosperity and happiness where family values were seen as vitally important and medical knowledge and technology was improving rapidly.

In 1968 we reached a relative peak in population growth rate. Humanity grew at a record 2.09 percent that year. This was the peak of a seven year period of very high growth – from 1966 to 1972. While the growth rate of the population is expected to decrease over the coming years as the globe develops, there are strong concerns already regarding the demand the global population is putting on our planet, and on specific overpopulated regions such as South East Asia and Africa. The real question is –  what happens when there’s 3 billion more of us? 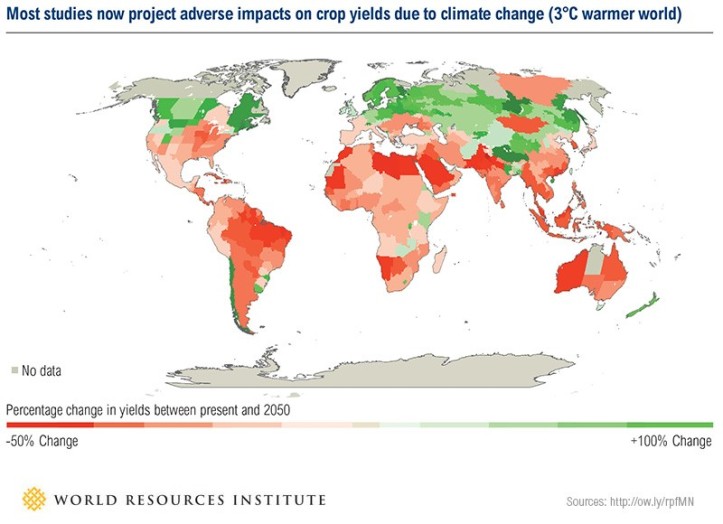 Not enough to go around…

There are various social and environmental issues that are associated with overpopulation, but one of the most pressing and concerning are that of our most precious resources – food and water. One billion, that’s one out of every seven people on the planet, go to bed hungry. Every day 25,000 people die of malnutrition and hunger-related diseases – almost 18,000 of whom are children under five.

Further expounding the issue is climate change. It is expected that two-thirds of the Earth’s agricultural regions will be degraded by climate change and that climate induced crop losses could reach 50 percent in sub-Saharan Africa in 10 years. In relation to overpopulation this is particularly distressing as the population in Africa is still growing at a rate close to over two percent. By 2030 the sub-Saharan African region is expected to have the second largest number of women of reproductive age, surpassing Eastern Asia with between 40-49 million births annually.

The major concern is that demand will outstrip supply. We are already using all the highly productive land available to us with agriculture occupying 30-40 percent of the earth’s surface. The current trend is for developed nations to buy up large tracts of arable land in developing nations for agricultural production that exports largely to meet their own need. Obviously this incurs the dual problem of being unsustainable and depriving some of the worlds most populated regions of their own food and water supplies.

In the end, it is not food that is the most important resource for humanity, but water. 70 percent of the Earth’s surface is liquid, but only 2.5 percent is fresh water and of that only one percent is available for human use. This amount cannot change, it is finite and currently we consume 50 percent of all water that is available. The impacts of this demand is so large that it can be seen from space:

One billion people currently lack access to sufficient water for consumption, agriculture and sanitation – aquifers are being depleted faster than they can be replenished. If the population reaches 10 billion, it can be expected that two out of three people will have problems in being able to access enough water. If we wish to avoid mass dehydration events then consumption habits will have to change as water that is used in the home is only a negligible portion of what is consumed. One cup of coffee requires 120 litres of water to be produced and one hamburger requires 8000 litres. As nations develop, products initially only available to the wealthy nations will begin to be more ubiquitous, further draining precious water supplies.

But overpopulation and its related impacts extend well beyond food and water. Global warming is set only to be exacerbated by a larger population. Pollution caused by increased population and population density is also affecting air quality, an issue that the world’s two most populous nations – China and India – are becoming all too aware of. The pressures of overpopulation are pushing communities to the edge of the habitable periphery, one’s that were barely populated 30 years ago. Hundreds of thousands of people died in 2010-2011 in Pakistan as they had moved onto floodplains for lack of space. The same is true in developed nations such as Japan where its tsunami-prone coasts are now becoming residential areas and in the USA where urban sprawl is destroying acres of farmland, grazing land and forested areas every day.

As populations begin to be displaced due to overcrowding, climate change and lack of essential needs such as food and water one of the inevitable outcomes is conflict. Christian Aid forecasts that there will be one billion climate refugees by 2050, considering the current refugee crisis due to conflict in the Middle East and Africa it is impossible to imagine how nations will cope with such a number of displaced peoples. As populations increase, energy resources are set to only become scarcer.

Few unexplored regions remain left for the fossil fuels that the world’s economy still requires and competition is fierce. Desperation may lead to some of the world’s most populous and powerful nations butting heads. Resource conflicts are already underway in some regions; a decline in water flow from the Tibetan Plateau is set only to worsen in coming years. Around 40% of the world’s population relies on water from the plateau and China and India are already involved in a race to tap into the Himalayas for both water and energy, with plans for almost 400 hydropower dams in the region. Other implications of overpopulation include the spread of disease, with instances such as the Ebola crisis becoming more common and widespread, and the expansion of poverty as nations fail to develop at a rate that can support ever-expanding populations.

So what are the solutions? Lessons may be learnt from the developed world. According to the United Nations, population increases have either slowed, stopped or even declined in Europe, North America and Japan. The most growth is occurring in sub-Saharan Africa and parts of South and Eastern Asia. These regions are ones that need to be targeted most.

One of the most effective solutions for overpopulation as well as poverty is the empowerment of women and families through family planning. Around 200 million women around the world would prefer to stop having children but do not have access to contraception and reproductive healthcare. Over 80 million births each year are unplanned – the same number as the rate at which the population is growing. Studies have shown that when women have more education and job opportunities, they choose to have smaller families and are able to invest more in each child, helping to break the cycle of poverty. There is only one state in India with a stable population, it also happens to be one with some of the highest literacy rates in the world in both girls and boys. The birth rate is 1.5 children per family, a figure largely attributed to the state’s gender equality in education.

There is also the argument for economic measures such as tax benefits or concessions, such as China’s one child policy. While extremely controversial, and largely inapplicable to other nations, without the one child policy there would be 400 million more people in China. There have been similar attempts in India to enforce lower birth rates such as ‘sterilisation festivals’ with incentives for vasectomies and, at one point, a law which ordered all criminals to be sterilised – one which lead to the downfall of the government in power at the time.

In the end, it is through the spread of new societal norms, where smaller families are the preference and not having children is not shamed, where the solution lies. Through the education of both women and men, and the provision of family planning services as well as access to contraceptives this can be made possible in the areas in which it is needed most. Also developing more sustainable living practices and reducing consumption will aid humanity in progressing past this century. For the fact remains, we only have one planet. That planet has a finite number of resources that we all must share. So, for the sake of the future of our species, the population bomb must be disarmed, there are few matters of more urgency for our immediate future. We have been living beyond our means and soon will come a time when we will reap what we sow.

Have your own thoughts on the worlds population?

For questions, comments and pitches, contact the editors at: theglobalquorum@gmail.com