Europe: Crisis in the Mediterranean

“Tens of thousands of vulnerable people making the perilous sea journey to escape war or poverty, who arrive on these islands only to be met by a support system on its knees” – Amnesty International’s Director for Europe and Central Asia, John Dalhuisen

Libyan authorities are continuing the search off their coast following the capsizing of two boats. They were packed to the brim with more than 500 migrants between them. Only 198 have been confirmed as rescued with 82 bodies washing up on shore and the 200 that remain missing feared dead. Sadly, this tragedy barely gains international attention any more as the sinking and deaths at sea have become common occurrence as hundreds of thousands flee the war-torn Middle-East, Africa, and Asia in search of a home in Europe.

The nations of Italy and Greece have become have become the epicentre of this unprecedented  humanitarian crisis. The civil war in Syria has driven what the International Organisation for Migration (IOM) calls “the biggest movement of people since world war two”. It has resulted in 8 million people displaced inside of the country and 4 million people leaving it, but it is just one source of misery inside of a region of collapsing states. Iraq and Afghanistan are similarly big contributors to the refugee crisis as their people flee a resurgent Taliban and a resilient Islamic State. Looking further afield, Africa and Asia are also contributing significant populations thanks to growing regional instability.

German Chancellor Angela Merkel has described this crisis as “one of the greatest challenges the EU has faced” since its creation. According to Frontex, the EU border agency, more than 340,000 migrants have arrived in the European bloc since the beginning of 2015 alone. This is up from 280,000 from the whole of 2014. 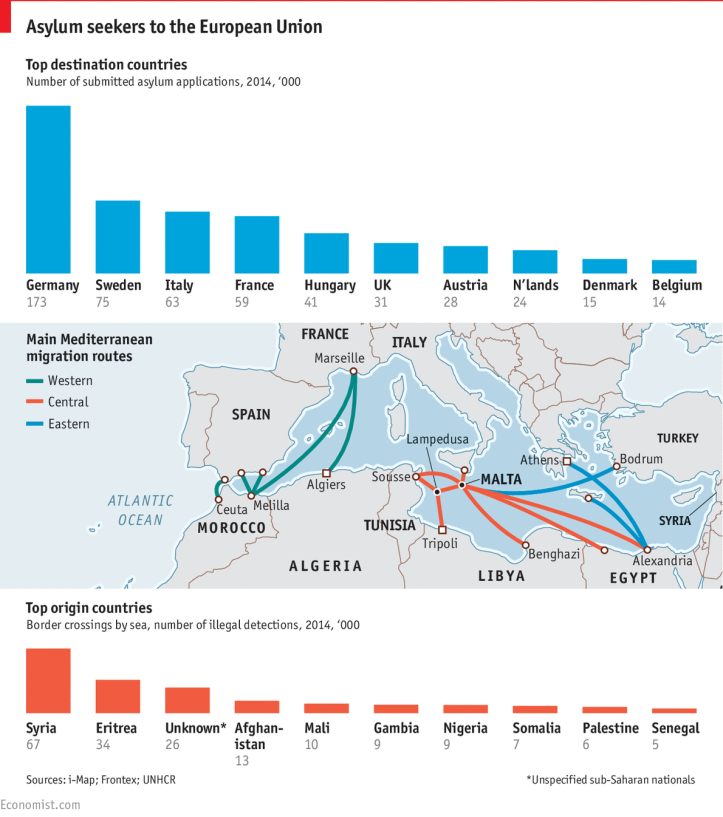 The Greek island of Leros is a perfect snap-shot of this issue. A recent influx of 9,000 refugees has swamped its small team of coast guards. More importantly, the local population of 8,000 is sick of harbouring each new wave of asylum seekers and is struggling to cope with the increased burden of supplying basic food and shelter. This is an attitude that is becoming ingrained across the EU as countries are increasingly closing borders and hearts to the plight of these people. There is a deep divide as to whether accepting more asylum claims should be permitted and if this will only increase the numbers fleeing towards Europe.

Each month, thousands of desperate people attempt the long journey into Europe across a dozen national borders. Some march through the Balkans via Greece, Macedonia and Serbia in search of vulnerable entry points into the European heartland from the East. Frontex says there is little deterring migrants from embarking on these long journeys with a record 43,000 illegal crossings confirmed in the Western Balkans during 2014. That’s double the previous year’s figure, with new records predicted for 2015.

Checkpoints and border patrols have proven to only be a stop-gap. It has emerged that some Syrians have even travelled so far as the Arctic Circle, in far northern Russia, to reach a crossing into Norway. Now, up to 20 Syrians a month are crossing into the tiny Norwegian town of Kirkenes in search of asylum. That’s about 2,500 miles north of Damascus.

Despite the colossal and growing numbers, the human catastrophe has gone largely unreported and unnoticed. The crisis has only recently returned to the public conciousness following the capsizing of 5 migrant boats during April of 2015, carrying an estimated 2000 individuals in the Mediterranean Sea off the coast of Greece. Like the boats off the coast of Libya, the death toll is unacceptably high,  placed at more than 1,200 individuals. Travelling over land can be no safer, requiring complicated smuggling routes over difficult terrain in the hands of shady underworld figures. Last August, the discovery of a truck parked on a motorway in Austria exposed the dark reality of these attempts when it was discovered that  71 refugees  had suffocated inside due to bad ventilation.

Greece has borne the brunt of the human cost in recent years, surpassing Italy as the number one European recipient of mainly Syrian and Afghan refugees according to a UNHCR report. Its geographic proximity to Turkey has made it a key destination for human cargo brought by the people smugglers. From there, they begin the long journey to what they see as the prosperous Western Europe.

The economic turmoil facing Greece has distracted it from instigating an effective response to the endless waves of desperate people. The numbers have overwhelmed refugee reception mechanisms on its islands of Lesbos and Leros, the two primary ports for assessing asylum claims. Amnesty International’s Director for Europe and Central Asia, John Dalhuisen, has described these refugees as “tens of thousands of vulnerable people making the perilous sea journey to escape war or poverty, who arrive on these islands only to be met by a support system on its knees”. Greece now entirely lacks the infrastructure to cope with the growing price of being asylum seekers first port of call for their journey into Europe and is in no position to be Europe’s gatekeeper.

Greece, alongside UN Secretary General Ban Ki-moon, have appealed to EU leaders to develop a coherent and coordinated response mechanism. Mr Moon recently pleaded with EU decision makers “to expand safe and legal channels of migration and act with humanity, compassion, in accordance with their international obligations”.

Among the 28 EU member states Germany in particular has urged for a universal approach to this crisis.  Jean Claude Junker, President of the European Commission, has gone so far as to call for an end to xenophobia that may be prevailing in some regions of the continent. He believes there is a belief that “pushing back boats and turning a blind eye” is the prevailing attitude, that there are “no national solutions”.

The response to this crisis is not by any means united.

Hungary has embarked on a 175km razor wire border fence to deter refugees. Britain and France have followed suit with the tightening of security at the French end of the 49km ‘Chunnel’.

As opposition to the influx of migrants grows, countries such as Denmark have begun to threaten Greece with expulsion from the EU if it continues to allow migrants free passage to the rest of Europe. There is an attitude that it must be the sole responsibility of those countries along the borders to simply reinforce their borders and deal with the problem themselves.

Changes are also occurring within the EU’s generous asylum seeker programs. Instead of increasing numbers, states across the Bloc are moving to tighten up social policies and clamp down on their migrant populations as a heavy handed deterrent. Denmark, for example, has dramatically slashed benefits to those who are granted asylum.

Where entry has been granted, the capacities of states are too ill equipped. It’s not just Greece and Italy feeling the strain either. Hungarian authorities are now requesting €8 million to expand their reception capabilities, a call that is echoed in Slovakia and Poland.

The 1985 Schengen Agreement is now also under threat. Enshrined in the EU’s constitution, it allows for the freedom of movement across internal borders of its members’ states. Border checks are thus eliminated for those citizens holding an EU visa, enabling them to travel unimpeded through its 28 member states.

This freedom of movement has previously come under pressure. In 2011, the then President Nicolas Sarkozy of France and Prime Minister Silvio Berlusconi of Italy, called for Schengen’s reform following domestic pressure from the right-wing to curb large-scale immigration from North Africa.

The reforms did not come to pass however and Germany has since taken 40% of Syrians who have reached Europe. It is expected that by the end of 2015, Germany will have received 800,000 Syrian applicants seeking asylum, four times the amount processed in 2014.

On the 24th of August 2015, the German Federal Office for Migration and Refugees issued internal instructions suspending the Dublin protocol in respect to Syrians. Under the protocol, the first country that processes an asylum claim must take care of them if they are determined to be legitimate. This is the underlying reason that so many try to smuggle themselves into Western Europe where they aim to turn themselves over to the authorities of countries that are perceived to be generous to asylum seekers. This, according to German Foreign Minister Frank-Walter Steinmeier, was intended to “find a way of creating binding and objective refugee quotas that take into account the ability of all member states to bear them”.

Despite Germany’s decision to act as an example in regards to Syrians in particular, the philosophy that produced Schengen is again being challenged.

According to Germany’s Interior Minister Thomas de Maiziere, Germany’s membership in the Schengen Agreement may become unsustainable due to the climbing influx unless its neighbours share in the current distribution method or discuss a new system. Dr. Alexander Betts of the Refugee Studies Centre at Oxford University has determined that dispersing the current 310,000 people among the 28 countries of the EU “should not be unmanageable,” a small number compared to the 3.5 million Syrian refugees housed by Jordan, Turkey and Lebanon.

Germany’s federal system already reflects what could be an internationally recognised model – allocating its refugees among its 16 federal states through assessing the tax revenues and population of a region. Although all German constituents do not favour this, it is nonetheless far more sustainable than uneven distribution. If the Schengen agreement is allowed to collapse in the EU, the implications are that the glue that binds these states together may continue to dissolve.

Have your own thoughts on the Asylum Seeker Crisis? Drop a comment below and join the quorum!